With Thibault Gajdos, Boris Burle and F.-Xavier Alario we recently published a preprint titled “The Decisive Role of Non-Decision Time for Interpreting the Parameters of Decision Making Models”. As in any article, some choices had to be made and what I am presenting in this post was not the focus of the article (plus the analysis was unplanned and therefore should be taken with a grain of salt), but I still wanted to share this result as I find it extremely interesting.

In the study reported in the preprint, using experimental manipulations and an electrophysiological measure of response execution, we evaluated the ability of a decision-making model to account for latent cognitive processes in a perceptual decision task.

In this task we manipulated the amount of force to produce a response, speed accuracy trade-off instructions and finally stimulus contrast. This last manipulation had an interesting property that revealed a surprising pattern ! But let’s first review the task of the participants and some of the results from the study.

Participants had to indicate which of two sinusoidal gratings, left and right of a fixation cross, had the most contrast in it with the corresponding button press (hint : it’s on the left on the next image):

Now the contrast manipulation consisted in increasing the overall contrast of both stimuli while maintaining their difference constant :

Higher contrast, as on the right of the previous image, yields faster brain response even in the earliest visual sensory systems compared to dimmer stimuli. The nice thing about that manipulation is that, according to the law of Weber-Fechner, the difficulty in comparing the gratings increases with the increase in brightness. This can be seen on the behavioral performance, participants proportion of errors and Reaction Times ($RT$) increase when contrast increases (see the preprint for details of the figure) : Hence we have here a manipulation where you expect that the time for visual encoding of the stimulus evolves inversly to the time you need to decide. The overall measure of RT cannot show you both effects as they are weighting each other out. Ideally we would like to have a cognitive model of behavior accounting for both dimensions of decision and encoding times but that seems like a hard test for a model.

In our paper we tested amongst others, whether the well-known Drift Diffusion Model (as implemented by Ratcliff, & Tuerlinckx, 2002) captures simultaneously the decision and visual encoding properties of this manipulation.

The following figure illustrates this observation, the parameter for encoding time ($T_{e}$ y-axis) is indeed decreasing with contrast increase (x-axis).

Great news, a model like the drift diffusion model, using only RTs and choices, is able to show that visual encoding time is decreasing even though difficulty is increasing the $RT$s (although that is only true under some conditions and there is some uncertainty associated but see the preprint).

Now one thing is particularly interesting. I started to talk with scientists with more expertise in visual processing about the experiment. At that occasion I was redirected to an article written in 2012 by Reynaud, Masson and Chavane (https://doi.org/10.1523/JNEUROSCI.1618-12.2012). In their article the authors analyze, using voltage-sensitive dye, the temporal dynamics of visual neuron in the primary visual cortex, V1, of two monkeys (Macaca mulata) in response to a visual grating similar to the one we used. In one of their analysis (see Figure 5B. of their article) they report measurement of onset of activity in V1 neurons in response to different contrasts of the grating. Using the Naka-Rushton equation, a well known luminance-response function, in its inverted version (Barthelemy, Fleuriet & Masson, 2010) they provide a description of the onset of activity in V1 in response to different contrast levels.

Now things are getting even more interesting. One test we could do is : does the data from these monkeys relate to our estimate of visual encoding time in human using only a behavioral model (and some physiological information about response execution) ?

That would be wild but we tested it anyway, especially because the lead author of the paper on V1 activity in monkeys guessed that we should have a non-linear relationship which is indeed apparent in the previous Figure. The only thing we had to do was to recover the parameters of the inverted Naka-Rushton they obtained and generate predictions for the contrast levels we used in our study. Then we can just compare their predictions and our estimate of visual encoding in humans.

Damned that looks close !! What if we superpose both ? Well we could do that simply by displaying both, but obviously V1 neurons respond really fast and visual processing goes on beyond the first response latency, therefore we need to be on the same scale. We did this be simply subtracting the mean of each variable (human behavioral model vs V1 measurment) to each data point from the same variable ($x_i - \overline{x}$). Doing so we only keep the relative difference of each contrast point to the mean of each variable.

Wow… That is impressive !

A behavioral model (+ physiology of response execution) fitted on data from a decision making task performed by humans is capturing visual encoding latencies that very closely match actual measurment of primary visual neurons in monkeys ! It is important to note that no fit occurred between V1 predictions and the estimated encoding time, we just centered each variable !

Now the story doesn’t end here This congruence for example only happens when we particularly stress participants to respond as fast as possible. When we switch to an accuracy-focused condition, things do really not look the same :

But still, the fact that physiological measurment of primary visual cortex neurons from another specie predicts that well the estimates of a behavioral model of decision making in humans is a really impressive performance ! 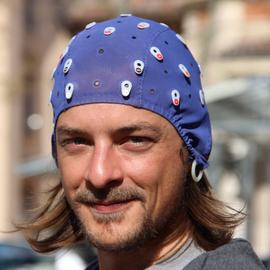 My research interests is mental chronometry, the time taken by information processing units in our brain. To study these times I rely on cognitive models of behavior that I combine with neural data such as electro-encephalography.